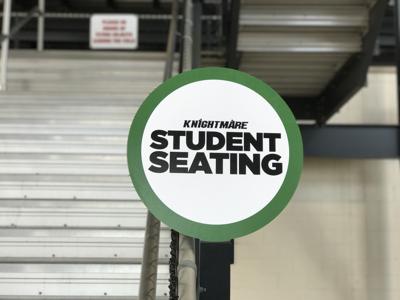 This football season the UCF Athletics Department and Student Government Association decided to move the student section in Spectrum Stadium to hopefully benefit the football team and students.

SGA President Nick Larkins and the Athletics Department came up with the idea to expand the student section into both end zones.

Associate Athletic Director of Fan Development Jimmy Skiles said now the opposing team can’t get away from the student section.

Skiles said that UCF sent out a survey to get Knights fan's opinions on the switch.

“One thing that we found through surveys was that the higher students were sitting in the stands, the more likely they were to leave at half time,” he said. “We were trying to figure out a way to get them lower to the field and get double the students into the action. It helps the football team.”

Eighty-seven percent of those surveyed said they liked the student section in both end zones.

“We set the student attendance record at the first game, and the second game we still had a lot of students in both end zones,” Skiles said.

“It does help make the stadium fuller,” Smith said. “As we get better and more fans go to the games, I don’t think it’s going to be a viable option anymore, and now it’s not as loud on the sides as it used to be when the students packed in on one side of the end zone.”

Getting closer to the action isn’t the only change for students at Spectrum Stadium.

SGA Vice President Cristina Barreto had the idea to keep students at the game by offering $2 hot dogs and $2 bottled waters for those with a valid student ID.

Barreto realized part of the reason students don’t go to the game is because after a long day of tailgating, students are hungry and thirsty but they know stadium food and drinks can be expensive.

“The fact that it may potentially cause students not to go to the game is something we’re trying to fix,” Larkins said.

Students are also being offered free water at both end zones, provided by SGA and Spectra, Spectrum Stadium’s food service provider. SGA is handing out 1,000 refillable bottles and students are able to fill up the bottles for free, as well as reduce plastic consumption.

“It’s a win-win,” Larkins said. “But since student funds are use to purchase anything SGA hands out, in order to get a free water bottle students must show their valid UCF student ID.”

Students can see the new sections at the Oct. 14 game against East Carolina at 7 p.m.