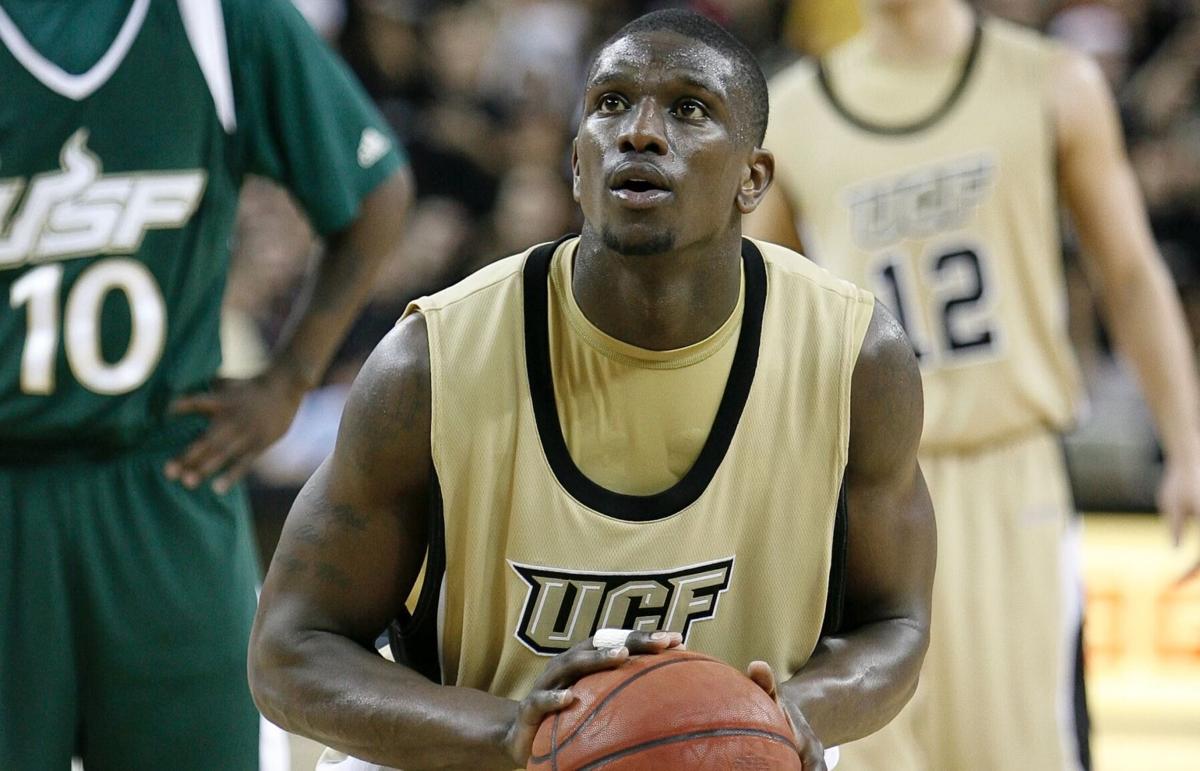 UCF shooting guard Jermaine Taylor gets ready to take a free throw at the line. Taylor scored 1,979 points during his college basketball career, the most in the Division 1 era of UCF basketball. 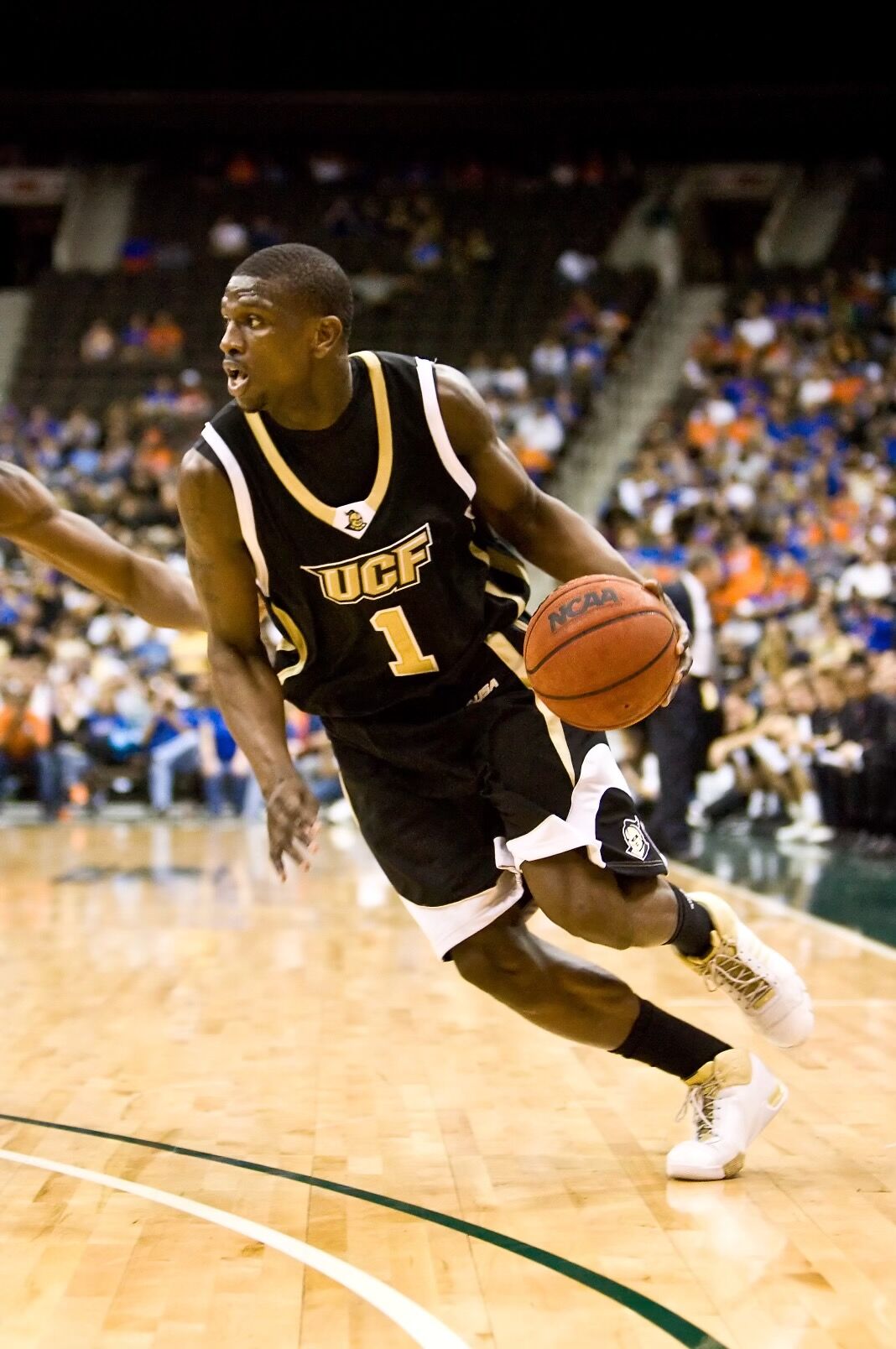 UCF shooting guard Jermaine Taylor prepares to take it to the hole and score. Taylor was inducted into the UCF Athletics Hall of Fame Oct. 8.

“He was just one of those nice, humble kids: full of talent and very humble," Whitford said.

Taylor was inducted into the UCF Athletics Hall of Fame Oct. 8. He scored 1,979 points during his college basketball career, the most in the Division 1 era of UCF basketball. Taylor drained 63 3-pointers during his second year with the Knights, averaging 41.4% behind the arc.

Taylor set a school record during his senior season, scoring a total of 812 points, and would also become the highest-ranking NBA draft pick in UCF history when selected by the Washington Wizards as the 32nd overall pick in the 2009 NBA draft. Speraw said Taylor was the first high-profile recruit who took the university's basketball program to a major level. Taylor was, Speraw said, a great teammate and a tremendous representative for UCF throughout his entire career.

“He was very talented," Speraw said. "He was a gifted basketball player: athletic, fun to watch, but he was a great person too."

Whitford said his fondest memory of Taylor is when he visited UCF after a few years of playing in the NBA, sought Whitford out and gifted him a Cleveland Cavaliers jersey.

“He still remembered me after he had been long gone for three years,” Whitford said.

Originally from Tavares, Florida, Taylor said he started playing with basketballs at 4 years old, but he didn't play the sport itself until he was 9. During his early basketball career at Tavares High School, Taylor averaged 25 points, 11 rebounds and five assists per game.

Aside from excelling in basketball, Taylor was also an outstanding football player and track star. He finished with 481 receiving yards and eight touchdowns his senior season and placed second in the Florida Class 2A Track and Field Championships in both the triple jump and high jump.

Taylor said he received scholarship offers to play football at the University of Florida and the University of South Florida, but he decided to turn them down because playing basketball was his passion. He said even though people were telling him he was better at football and probably could've gone further in the sport, it didn’t matter because he loved basketball. Taylor would go on to attend UCF on a full-ride basketball scholarship.

“Anything that I do, I can't really do it if I'm not passionate about it," Taylor said. "Basketball was always my first love.”

Speraw said Taylor was a great teammate, leader and a tough competitor, and he did not like losing at all. Taylor would get back in the gym, work hard, watch film, correct mistakes and come back the next time with a readiness to get down and compete, Speraw said.

“You never had to worry about whether Jermaine was going to show up and give his all each and every night,” Speraw said.

Taylor said if he has a game, his whole day is built around preparing for that game, and he doesn't think about anything else. He said he has a specific routine for game days: He wakes up at a certain time, does certain workouts, eats certain foods and makes sure he gets a nap in to ensure he is fully prepared.

Speraw said during the first two years of Taylor's collegiate career, the Knights were playing in what is now the practice facility, a high school-type gym. In the small space, Speraw said Taylor still helped the team play well against high-level competition, such as the University of Houston and the University of Memphis.

“He was a big reason that we were successful when we did move into the arena, and he was a fan favorite and one of the most exciting players to play in college basketball during that time,” Speraw said.

Taylor said he's back at UCF finishing his degree and is still involved with the men’s basketball team, attending practices and mentoring players. Taylor said it's important to offer guidance to the current players because he has career advice he can share with them.

“Because I was one of the first to be drafted here, I didn’t have anybody who I could talk to for guidance on how things worked on the next level, so I made mistakes on certain things," Taylor said. "There are things now that if I could go back, I would do it totally different, so all of those things that I would do totally different is what I try to tell these guys."

Taylor said he wants to make sure the players understand the importance of finishing school and that things would have been so much easier for him if he had finished his degree while he was playing.

“You’re here for four years," Taylor said. "You're going to be here, (so) you might as well do what you're supposed to do and finish, so you don’t have to come back.”

Taylor said returning to UCF and seeing how much the school has grown has made him so proud.

Speraw said Taylor's determination to finish school is a true testament to his character.

“There are not many people that have been out for a while who are willing to come back and finish their degree, and he’s doing that, and I think that tells you a lot about him ... and the type of character that he has,” Speraw said. “He is one of the all-time greats.”