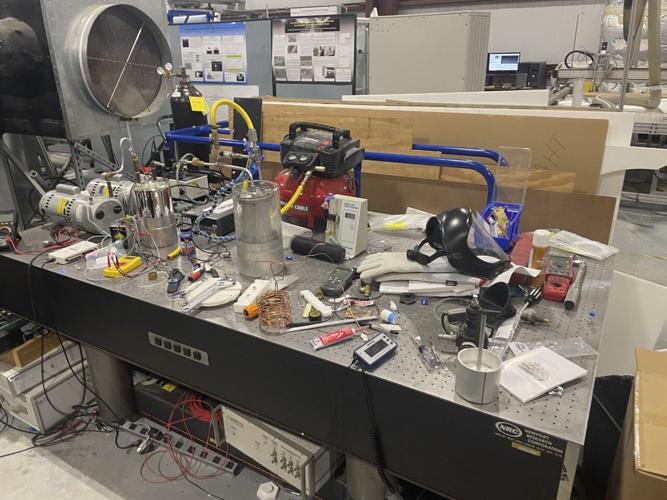 The silver cylinder in the middle of this work desk at Dr. Marcel Otto's lab is a smaller, unfinished model of what the system being designed will look like. 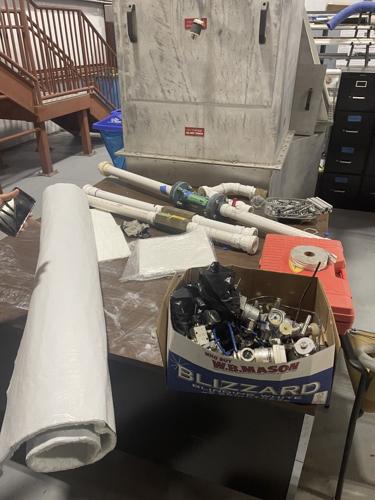 On the left side of the table is a roll of aerogel waiting to be cut and used for the adsorption process. Adil Riahi, mechanical engineering doctorate student, said adsorption requires a medium, and their medium of choice is aerogel.

A mechanical engineering team of professors at UCF is working to make the skies green by researching an alternative aviation fuel.

Dr. Jayanta Kapat, who is leading the team, said the team is focusing on decarbonizing aviation fuel because the members believe that doing so will speed up the decarbonization process of other fuel-using machines, such as vehicles and boats.

“In order to achieve total decarbonization, we have to target all the sources from which [carbon dioxide] enters the atmosphere,” Kapat said.

Kapat and his colleague on the project, Dr. Marcel Otto, explained more about Otto's aim to create an emission-free jet fuel that uses hydrogen instead of kerosene with a $10 million NASA grant they received in December 2021.

Otto is a postdoctoral research associate at UCF, and his primary focus is research related to gas turbine and power generation technologies.

Otto said that kerosene, the most common fuel that is used in airplanes, emits harmful levels of carbon dioxide into the atmosphere when burned. He said that carbon dioxide pollution is primarily responsible for global warming.

“We obviously have to do something about global warming and emissions. This is our contribution, so we feel very passionately about it,” Otto said.

The challenge with using hydrogen for fuel is that it is energy-efficient per kilogram but not per volume, Otto said. He said this means that most of the airplane’s cargo would have to consist of hydrogen storage tanks for fuel, leaving very little room for passengers and rendering it inefficient.

In order to combat this storage issue, Kapat and Otto are using the hydrogen that makes up the chemical compound ammonia for fuel.

Ammonia contains one nitrogen atom and three hydrogen atoms per molecule, and it is commonly used as a fertilizer, Kapat said. By heating it up, Kapat and his team will be able to split the hydrogen and nitrogen atoms from each other, effectively utilizing the hydrogen as fuel while expelling the environment-friendly nitrogen as exhaust.

“What we are trying to do is create a new, more efficient way of storing the hydrogen,” said Adil Riahi, mechanical engineering doctorate student working with Kapat and Otto on the project.

Riahi said they are utilizing a process known as adsorption in order to accomplish this, which involves sticking the hydrogen to a medium for storage. Their medium of choice is aerogel, which was chosen because it is cheap, available and malleable, Riahi said.

Another student working with Kapat and Otto is mechanical engineering graduate student Yakym Khylapov. He said that the system they are creating will be able to efficiently store the hydrogen that is to be used as fuel.

“We’ll be able to store a lot more gas in a lot less volume,” Khylapov said.

Kapat and Otto said they are looking to hire more students as this project gains traction and that students are more than encouraged to reach out to them.

“We are going to need a lot of qualified, interested students at the bachelor's, master's and doctorate level. We are happy to bring more on board,” Otto said.

Kapat said that while the work they are doing is important, it is only one step toward the ultimate goal of total decarbonization of global fuel emission.

“It does not help if we only work on one area but do not work on others," Kapat said. "Because when the carbon dioxide enters the atmosphere, there is no difference."