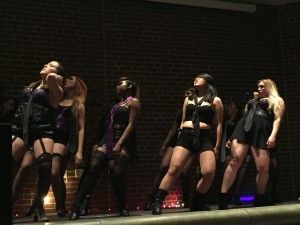 KeyHarmony takes the stage first for the R-rated concert. 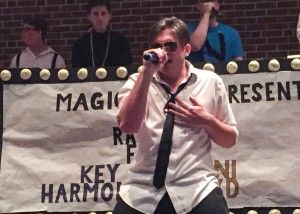 Brian Reading raps during a mashup of “Get Low” by Lil Jon and “Anaconda” by Nicki Minaj.

KeyHarmony takes the stage first for the R-rated concert.

Brian Reading raps during a mashup of “Get Low” by Lil Jon and “Anaconda” by Nicki Minaj.

A cappella groups KeyHarmony and Gemini Blvd. put on their most provocative performances yet, pairing risqué lyrics with suggestive dance moves at their "R-rated A Cappella" concert on Thursday, the first of its kind at UCF.

The show was geared to a more mature audience, with children under 17 asked to be accompanied by an adult.

"It’s very exciting because we have been talking about having one for years," sophomore Sarah Bookout, director of KeyHarmony, said. "This is a concert where we can let loose and have a fun time."

KeyHarmony opened the show with “Buttons” by the Pussycat Dolls. Other performances included “Burnin’ Up” by Jessie J, “Get Ur Freak On” by Missy Elliott and a mashup of “Partition” by Beyonce and “Get On Your Knees” by Nicki Minaj featuring Ariana Grande.

Gemini Blvd.’s songs included “I Just Had Sex” by The Lonely Island, “I Wanna Sex You Up” by Color Me Badd and a medley of songs from South Park.

Gemini Blvd. also held a fundraiser during intermission, auctioning off baskets showcased by the ladies of KeyHarmony, containing dates with unnamed members of the group.

There were seven dates in total, with descriptions like “Two Girls, One Basket,” involving drinks, dancing and cake with two members.

The most expensive date of the night, “Menage à 16,” featured kickball, food and singing with all of the members of Gemini Blvd., a t-shirt and copy of their album. It sold for $150.

The event ended with both groups joining together for a spirited rendition of “Show Me How to Burlesque” by Christina Aguilera, met with a standing ovation by the audience.