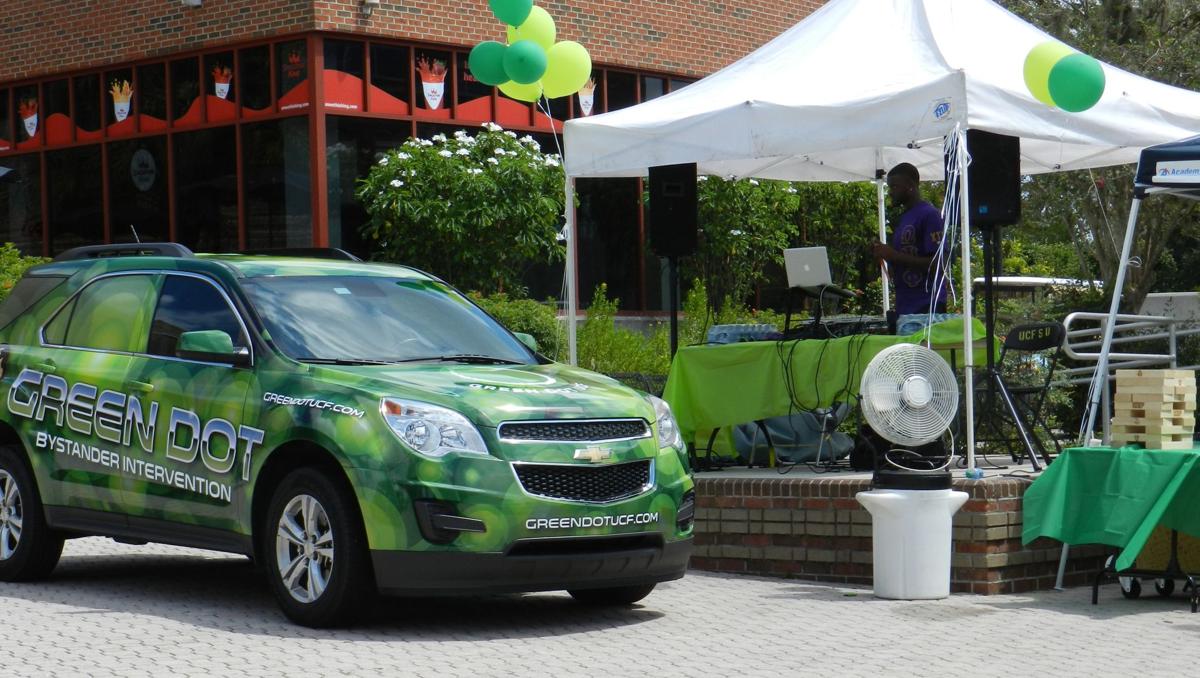 A DJ supplies entertainment to the Green Dot inaugural block party on Thursday, Sept. 8 outside the UCF Student Union.

A DJ supplies entertainment to the Green Dot inaugural block party on Thursday, Sept. 8 outside the UCF Student Union.

A DJ served up some tunes as students lined up to win prizes at the Green Dot block party in front of the UCF Student Union Thursday.

According to Vega, the program has been establishing itself privately at UCF for about a year and is now pushing to reach a public audience.

“We already have about 2,000 students aware of the program thanks to various marketing campaigns,” Vega said. “Of those 2,000 we have trained around 50 on bystander intervention.”

According to their website, Green Dot relies on peer-to-peer training in how to safely and effectively intervene in situations such as domestic violence, abuse and bullying. The organization has built a strong presence on college and high school campuses, both in the United States and around the world.

More than seven of UCF’s police officers were on hand at the inaugural event as the organization unveiled the new promotional Green Dot SUV design. Green Dot hopes the distinctive SUV graphics will raise awareness about the group’s existence on campus.

In addition to the police, UCF Greek Life also had representatives attending the event.

“[UCF Greek Life] is pledging to ensure that all of our [4,000] students are educated and aware of the progressive effect that Green Dot can have on our community,” said Woody Joseph, an assistant director of Fraternity and Sorority Life. “We want our students well aware of what it means to directly affect, delegate or distract a situation.”

Many of the students who came out to the event wanted to learn more about the organization.

“I was not aware of Green Dot’s existence,” said Sara Thorne, sophomore health sciences major. “I think it’s really cool that they’re raising awareness about intervening in difficult situations. They teach many of the tips I try to teach myself.”

National Green Dot Day is Sept. 18. The UCF branch of the organization will be appearing at different locations all around campus to teach students and faculty methods of intervention.

To learn more about the organization and its goals, visit www.livethegreendot.com.