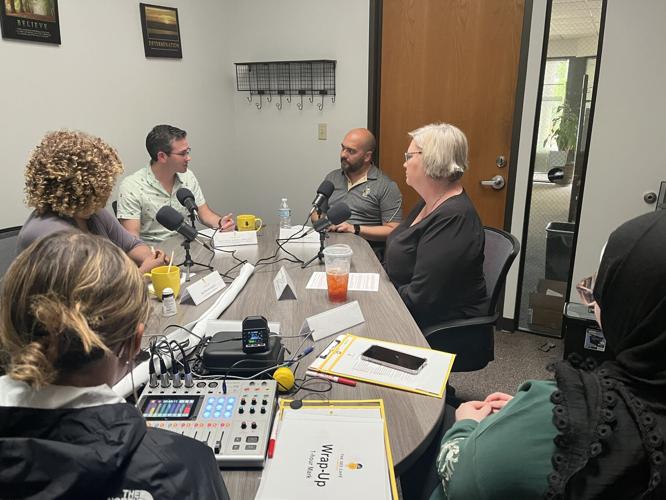 The religion and sex episode being recorded for the Sex Cafe Podcast on March 31 at Research Parkway. From left to right, Nicole Lasso, Kynthia Arrington, Daniel Garner-Quintero, Dr.Humberto Lopez Castillo and Jennifer Stiles-Williams. "If you're yucking somebody's yum, then you’ve probably gone too far" Garner-Quintero said. 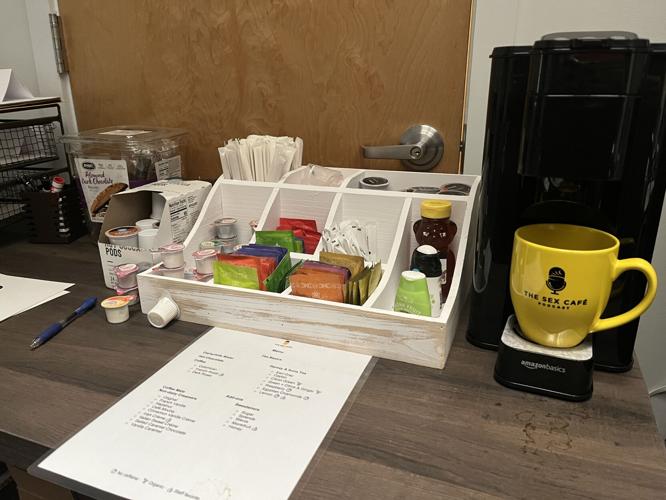 Every guest speaker at the podcast gets to take a coffee mug home after sipping on their choice from the Sex Cafe's menu. Guest speaker, Kynthia Arrington, a part of the religion and sex episode, picked the dark roast with Splenda on March 31.

The religion and sex episode being recorded for the Sex Cafe Podcast on March 31 at Research Parkway. From left to right, Nicole Lasso, Kynthia Arrington, Daniel Garner-Quintero, Dr.Humberto Lopez Castillo and Jennifer Stiles-Williams. "If you're yucking somebody's yum, then you’ve probably gone too far" Garner-Quintero said.

Every guest speaker at the podcast gets to take a coffee mug home after sipping on their choice from the Sex Cafe's menu. Guest speaker, Kynthia Arrington, a part of the religion and sex episode, picked the dark roast with Splenda on March 31.

A UCF Professor is wanting to break the taboo conversations around sex with his $32,000 research-granted podcast.

Dr. Humberto Lopez Castillo said he was inspired to pursue the research because he said he grew up in a positive environment around all aspects of human health.

Castillo is the primary investigator but is working with his two co-investigators, Dr. Christopher Blackwell from College of Nursing and Dr. Eric Schrimshaw from the College of Medicine.

The podcast will be released next Wednesday on Apple's Platform Podcasts and Spotify due to Castillo’s work within the department of Health Sciences.

Season one of the podcast includes 12 episodes with different themes surrounding sex within the sphere of religion, race, sexual identity and more.

Castillo said the topic of sex for him has never been a taboo conversation due to his upbringing.

“For me, it has been an open conversation that I've always had in my family. Matter of fact, an inspiration to this, my mother, she did her undergrad thesis on sexuality knowledge among teenagers. And I actually was proud to follow on those steps,” Castillo said.

Due to the proposal failing twice, Castillo decided to revamp his research and use it as the basis for the creation of his podcast.

Castillo said he believes the most successful episodes are when he acts as a moderator in the conversation.

“My metric for success is that I just stand back and let everybody have the conversation, even though most of them are perfect strangers. I just sit back and watch them talk as a ping pong game,” said Castillo.

He says he likes to pick open-ended questions as if he was in the shoes of an average listener.

He said he has seen an overlapping theme of lack of resources while filming but believes this is a good first step to build and map out the resources.

Castillo said he believes even in difficult conversations that there can be a positive spin in their talks.

“For example, right now, religion, instead of focusing into like, 'What is sin and what is sinful?' Let's frame it from a positive lens and see like, 'Okay, how do you support your church goers or your congregation into like, developing a positive, healthy sexual life?'” Castillo said.

Castillo said he believes in bringing in diverse speakers that would accurately represent the audience, including those with UCF ties.

“We can only find solutions to the issues when we hear all those voices of those who are affected by those issues,” Castillo said.

The speakers for the religion and sex episode included Jennifer Stiles-Williams, a lead pastor at the St. Lukes Church in Orlando; Kynthia Arrington, a pastor for Judah Kingdom Life Ministries; and Daniel Garner-Quintero, a licensed mental health counselor and a certified clinical trauma employee for UCF’s Counseling and Psychological Services.

Pastor Arrington said she accepted being on the podcast because she thought it was a great opportunity to expand her borders and share her faith.

“Faith-based people are having sex outside of marriage.. I’m breaking the silence,” Arrington said.

Garner-Quintero is featured twice on the podcast because he said he believes the conversations need to be had earlier in childhood.

“We are sexual beings from the day we are born, we can’t treat it as shameful,” he said.

Castillo says the podcast will be evaluated by the number of listeners and social media followers.

Sophomore film major Nicole Lasso edits and records all of the podcasts for Castillo.

Lasso knew Castillo because of family connections before they both moved to America from Panama.

She said it's been a challenge but an awarding one too.

"I had never edited a podcast before, but as an aspiring filmmaker working on every aspect is very important to me," Lasso said.

Lasso said it is also rewarding to hear all of the conversations while recording the episodes.

"Being the editor of this podcast has taught me a lot about dialogue editing and just editing audio in general, something that is honestly super important for filmmaking and all kinds of media," said Lasso.

After the episode recording is over, the work for Lasso doesn't stop there.

"I would edit the entire recording for one speaker, then for another and so on," Lasso said. "It takes a while, but I've noticed this is the most effective method and the one that makes more sense to me."

Each episode will be within 45 minutes to an hour for podcast which she says is also how long she aims to record for.

The Sex Cafe Podcast Season 1 is still in the works with three more episodes to record — lesbians, special age groups and policies on sex.

Castillo said that Season 2 of the podcast will be more directly based around the myths and diseases of sex which relates more to his teaching course of Introduction of Human Disease at UCF.

Castillo said his favorite a part about finishing an episode is that after the microphones are off, the conversation never stops.

A previous version of this article referred to Eric Schrimshaw as Eric Scrimshaw. The article has since been updated.