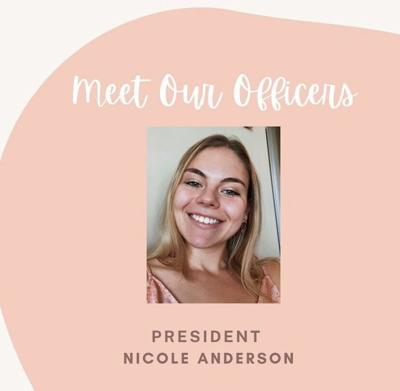 Nicole Anderson, president of Yoga for Brains and junior health sciences major, said when she suffered her concussion she went from "100 to 0."

“Yoga has a bunch of benefits, aside from people who have brain injuries,” Anderson said. "Yoga focuses on the present moment to get you out of your head."

“A girl kicked a ball up into the air and it collided with the ball that I was going to pass. Because the balls collided, one of them shot was into my face, hit me in my jaw and whiplashed my head back,” Anderson said. “The trauma went to the center of my brain and gave me a severe concussion.”

Julia Stern, sophomore political science major who attended the last Yoga for Brains event of the semester on Nov. 19, said she is not knowledgeable about concussions.

“I could not tell you what a concussion does to somebody,” Stern said. “ I just know they’re out of whack for a little but, I don’t know the long-lasting effects.”

The recovery process for Anderson’s severe concussion did not happen overnight. She could not attend school during the first month of her concussion because she was on bedrest.

“I couldn’t hold conversations. I couldn’t cook. I couldn’t drive. I couldn’t do anything for myself,” Anderson said. “It took me four months to recover and feel normal.”

One of the challenges Anderson faced during her concussion was the lack of understanding from others about her brain injury. Because the injury wasn't noticeable, Anderson said she felt as though people could not understand why simple tasks were no longer easier for her to complete.

“People don’t understand what it’s like to go through a bad concussion or brain injury and how much it can affect your everyday life and mental health,” she said.

“When I went through both my concussions, I saw the Love Your Brain organization and wondered why we don’t have that at UCF,” she said.

"Love Your Brain promotes yoga and mediation and the benefits they can give people who have suffered from brain injuries," Anderson said.

"I was like why don’t I create an organization where people with brain injuries don’t have to feel alone in the healing process and have a community for a support system to help guide them through the recovery process during the semester," she said.

Anderson did not create the organization just for victims of traumatic brain injuries, but for all UCF students.

“Yoga has a bunch of health benefits outside of people who don’t have brain injuries,” she said.

Carly Diglio, junior event management major and vice president of Yoga for Brains, said she has never had a concussion and still benefits from yoga. Diglio joined Yoga for Brains to help Anderson, her sorority sister, with getting the organization registered.

“You don’t have to have a concussion to enjoy yoga,” Diglio said. ”I started doing yoga every day for anxiety.”

Diglio said practicing yoga made her feel less stressed and gave her energy.

Stern has also seen improvement in her mental and emotional well-being because of yoga.

“I normally do a 20 minute stretch in the morning, because yoga is calming and gives me a mental break,” Stern said.

Diglio noticed physical benefits from yoga as well. Yoga helped improve her flexibility, so she stopped seeing her chiropractor once a week for hip and back pain.

“I’m passionate about yoga and I think it can help people," Diglio said. "If you have had a concussion it will benefit you to join the club.”

Anderson said the purpose of Yoga for Brains is to create an empowering community that supports selfcare.

"After my concussion, it was difficult to get back on my feet and find people who could relate to my experience," she said. "The purpose of Yoga for Brains is to give people with similar experiences support so they never have to feel alone."