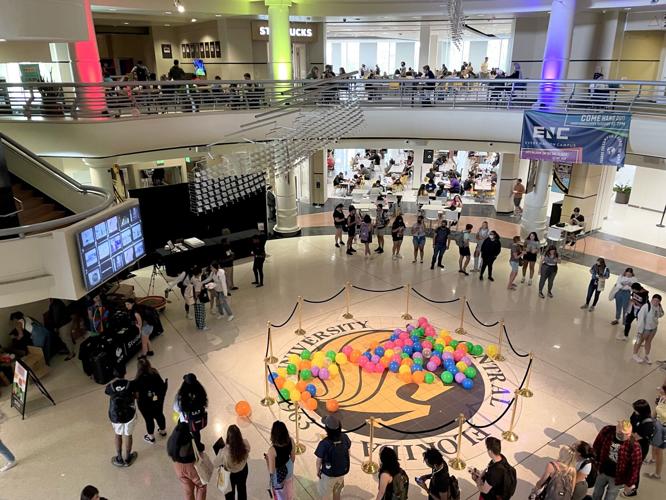 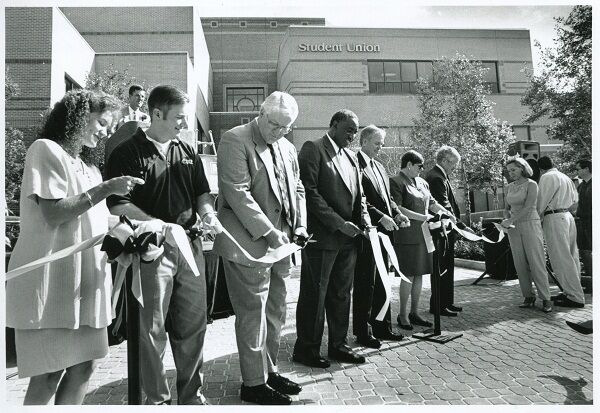 A ribbon cutting ceremony was held back in 1997 for the opening of the Student Union.

The Student Union, known as the "heart of campus", celebrated 25 years since its grand opening by throwing a party in its atrium on Wednesday.

Balloons were put on the seal, and students lined up around it to get free prizes from Student Union staff. This was part of the main celebration commemorating the Student Union, which opened for the first time in 1997. Retro '90s music replaced the low-tempo music usually played throughout the building.

The Student Union first opened up as a 130,000 square foot building with only an espresso stand for students to get coffee, according to the Orlando Sentinel. Throughout the years, restaurants such as Burger King and Domino's Pizza have been replaced by Qdoba, Chili's and many more.

When he first took on the role, Falco said the goal was to follow what the students want and don't want to eat. He said he wants the Student Union to be the spot where anyone can come to.

“The ability to disconnect in the Student Union while waiting for my next class was something I regularly enjoyed,” Veras said.

Veras said the Student Union he went to was very different from the one current students are experiencing now.

After the additional 33,000 sqaure feet, the main atrium with the seal stayed the same, but additional dining options were added. Notable restaurants such as Steak ‘n Shake, Panda Express and Qdoba were added. Starbucks was also added to the second floor.

Falco said this project took six years in total to plan, execute and complete. Falco said the biggest goal in the renovation was adding more tables and seating areas for students.

“There weren't enough seats for students,” Falco said. “Before, if you were walking in the Student Union, students would have to sit on the floor. You’d have to step around them.”

Falco said that at first, there were only three restaurants to eat at and around 200 chairs for students to sit in. Now, with over 70,000 students, the Student Union accommodated to that size.

“I definitely wish these upgrades had occurred when I was a student,” Veras said. “I’m glad the current students can enjoy it, though.”

Another addition being put in the Student Union is the Pegasus Penthouse. This was part the initiatives from the former Student Government president and vice president, Meg Hall and Austin Wilson, respectively. The new game room had a soft opening Friday.

Junior legal studies major Samantha Alvarado said she is excited for the new updates to the Student Union.

“I like how they’re making it more than just a place to eat,” Alvarado said. “They’re creating a fun environment for the student body.”

Falco said although there have been many exciting things about the Student Union, there were some challenges throughout his time here.

“Navigating construction through COVID was challenging,” Falco said. “Especially with all of the campus being shut down.”

“It’s a place for everyone,” Alvarado said. “It definitely brings the whole community together.”