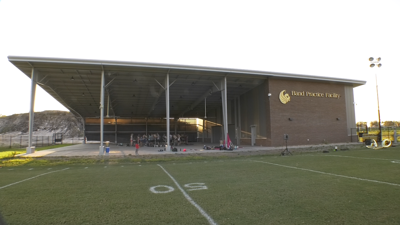 The largest student organization on campus had never had a permanent building to call home.

The Marching Knights now welcome a 3500-square foot band facility after previously operating out of a trailer. The facility, on the south side of campus near the intramural fields, provides the 325-member band a place to store most of their instruments and the ability to practice regardless of weather.

Although the program was organized in 1980, the Marching Knights had never had a set building of their own.

With the help from donors, former band director Scott Tobias and the dean of the College of Arts and Humanities Jeff Moore decided to go to Virginia Tech to do research on what makes a good band building.

Then about a year ago, there was a ground breaking.

“We have one of the largest marching bands in the country without their own facility,” Director of the School of Performing Arts Michael Wainstean said. “After a while the roaming around from facility to facility got to the point where it was detrimental to the overall quality of the band.”

The university understood the necessity for the largest student organization at UCF to have a permanent home and with the help of UCF Facilities and Operations, and funded a new band facility.

“With this new facility we feel like we have an actual home here at UCF,” senior band member Sarah Spielman said. “It’s great to be appreciated and to know that athletics and the university see the work that we do as great work for the university.”

Director of Athletic Bands Tremon Kizer believes the university putting resources aside for the Marching Knights will help with recruiting when students are deciding on which university to go to in Florida.

“There are a lot of universities across the country that don’t have devoted marching band facilities,” Kizer said. “So that’s a game changer. They see that there is a home for them.”

Kizer compares it to universities that try to recruit athletes in other ways that are not in the classroom.

Kizer said the new facility will also help with the Marching Knights' performances.

“It allows us to be even more innovative with the type of programs we put together in the Marching Knights field with having this facility,” Kizer said. “The future is only bright with having this building.”

The Marching Knights hope the opportunity for community outreach will improve as well.

“The Marching Knights is UCF’s band and we are the community’s band,” Spielman said. “We are here to provide the best show that we can and this facility is definitely a great resource and a great step forward for us to be able to do that.”