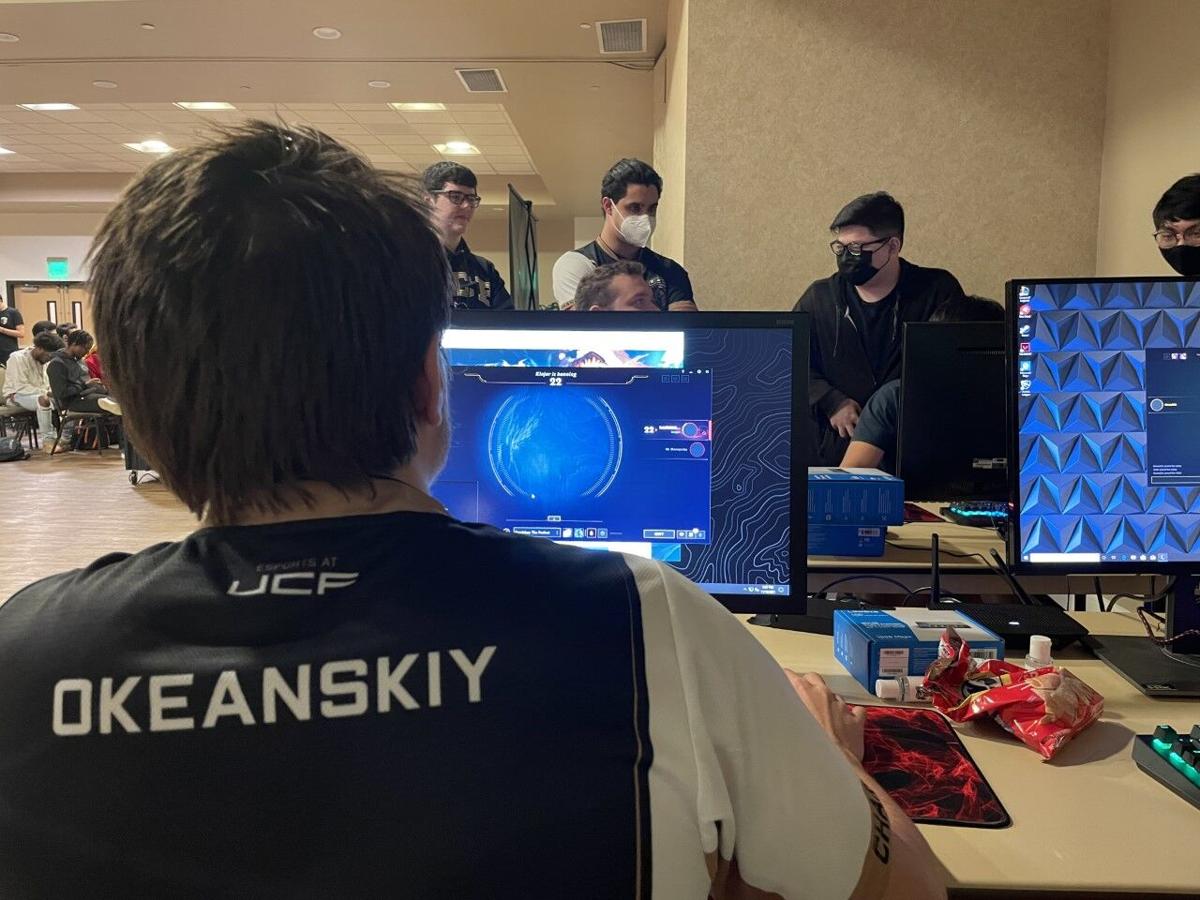 Adam Cunningham, also known as Okeanskiy to the CS:GO esports team at UCF, waits for his opponent to lock in their champion, as he competes in the League Of Legends tourney Friday night. 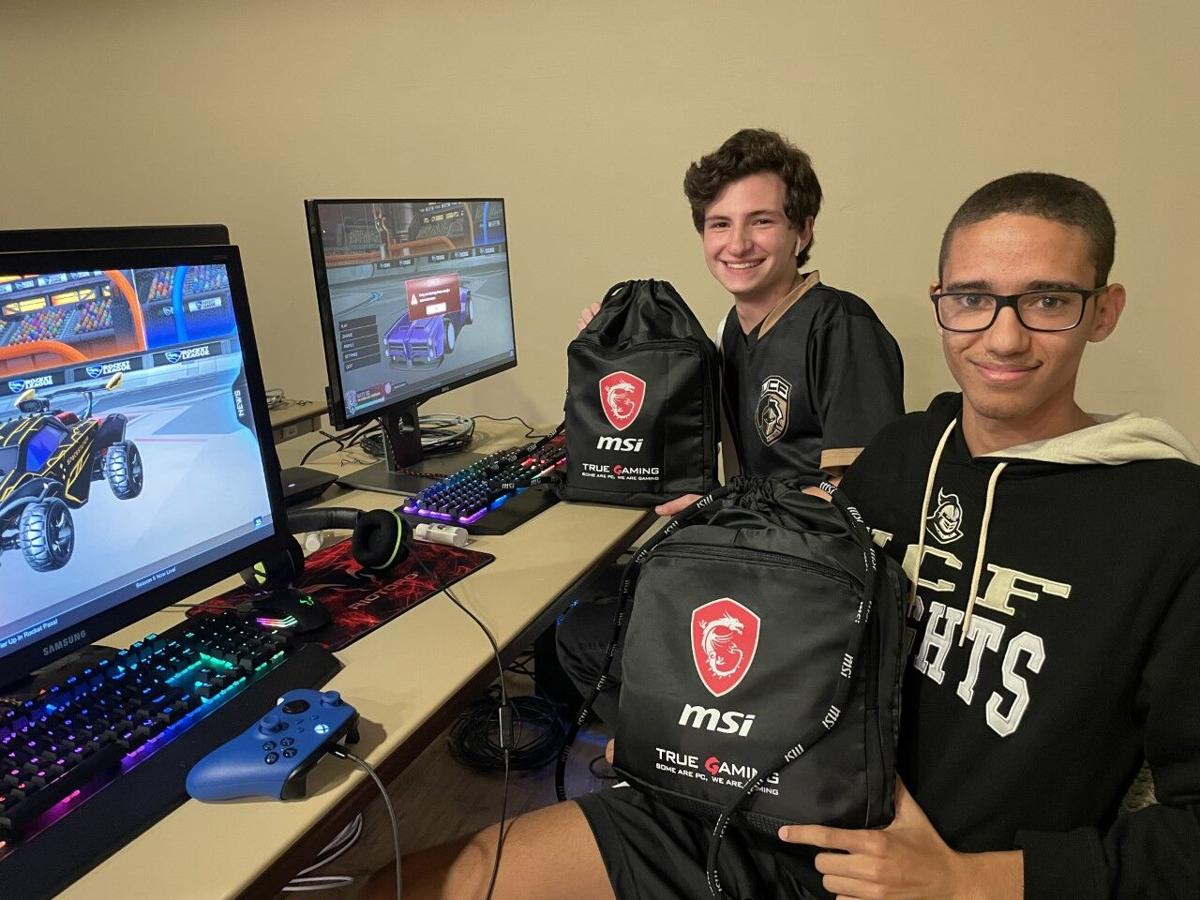 Rocket League tourney winners, junior David Qualls and freshman Anthony Rattigan pose with their prizes provided to the Esports at UCF club by MSI Gaming. Both teammates are on the Fall Student Series for Rocket League.

Adam Cunningham, also known as Okeanskiy to the CS:GO esports team at UCF, waits for his opponent to lock in their champion, as he competes in the League Of Legends tourney Friday night.

Rocket League tourney winners, junior David Qualls and freshman Anthony Rattigan pose with their prizes provided to the Esports at UCF club by MSI Gaming. Both teammates are on the Fall Student Series for Rocket League.

Two teams awaiting their match warmed up inside the Key West Ballroom Friday night —  black and gold jerseys with their names stitched across the back.

As music played in the background, a crowd of students became excited for the match about to begin. However, there were no soccer balls or cleats, no cheerleaders or band, and there were no referees on the field for the coin toss.

The players sat down, monitors lighting their faces, ready for an esports match-up against their peers. This is Esports at UCF.

Esports at UCF is a student-run and led esports club. The organization was founded during the COVID-19 pandemic and since then has run all their practices and meetings online.

The club put on their first-ever in-person LAN party Friday night in the Key West Ballroom that was open to all club members and general body students. A LAN event, or Local Area Network event, according to Polygon, is a temporary gathering of people for the purpose of playing video games together in the same physical space. Around 40 of the club's members came out to support the club and esports.

Esports is a fairly new concept to American culture. According to Esports Insider, American viewership of esports has slowly increased over the last five years but still pales in comparison to traditional sports. As the name entails, esports, or electronic sports, is the competitive play of video games, and it is taking the world of competition by storm: ESPN hosts games of the Overwatch League, and Riot Games’ 2021 League of Legends World Championship brought in a record-breaking 4 million viewers in November, according to data collected by Esports Charts.

The future leagues of competitive gaming are here to stay, and many aspiring to be the industry’s future leaders are at UCF, starting with the welcoming community the club has cultivated.

"The community of Esports at UCF has given me a home, a place where I feel like I belong and can make new friends and work with an amazing team of staff members to showcase what the esports scene has to offer at UCF," junior hospitality major Nicholas Jambe said. Jambe is also the club’s event assistant coordinator.

Tournaments were set up where attendees could face off in Rocket League duos, with two-person teams facing off against other duo teams. The other tourney consisted of one-on-one League of Legends matchups that were hosted throughout the night. Community members dawned their jerseys and some even wore face coverings with the Esports at UCF logo front and center.

“Our community is massive, you have the main games that have a lot of popularity but we try to build a community for every single game,” Marketing Coordinator Moises Lobaton said. “We want to let people know that we could house them under us, and they could find people to play with for any game they want to play.”

Giveaways and grand prizes were awarded throughout the night including HyperX headsets and MSI Gaming keyboards for the tourney winners. Community members sat and watched streams of the games being played out in front of them, yelling and cheering along their fellow community members, some even ordering pizza for everyone to enjoy while the event continued through the night.

"Anyone can play, you don't have to be on a team to get up there and play,” the club’s event coordinator Jake Hardy said, a comment which brought many students to try out some games all in the name of good, competitive fun. The senior hospitality major was in charge of holding the club’s first-ever major LAN.

Some attendees brought their own computers to participate on, while some signed up for the tournaments at the front desk and played on computers provided by the club.

"I didn't really have many people, except for online people to play games with,” aerospace engineering freshman Ethan Kalb said. "Now that I can meet with this group in person and attend a LAN for the first time, late night gaming events and all that fun stuff. It honestly is what keeps me going."

Many students who have a pastime in gaming said they have found a home in the club, no matter their backgrounds. Some students attending were also a part of the staff for the club and were participating in the games just like regular members.

"Many people have worked very hard to create this inclusive and welcoming space where anyone can come, meet new people, and share in a hobby that all of us enjoy. It gives me great joy," philosophy senior Luis Gomez said. Gomez, is the Esports at UCF president. "I was also thrilled to see so many people having fun and enjoying themselves."