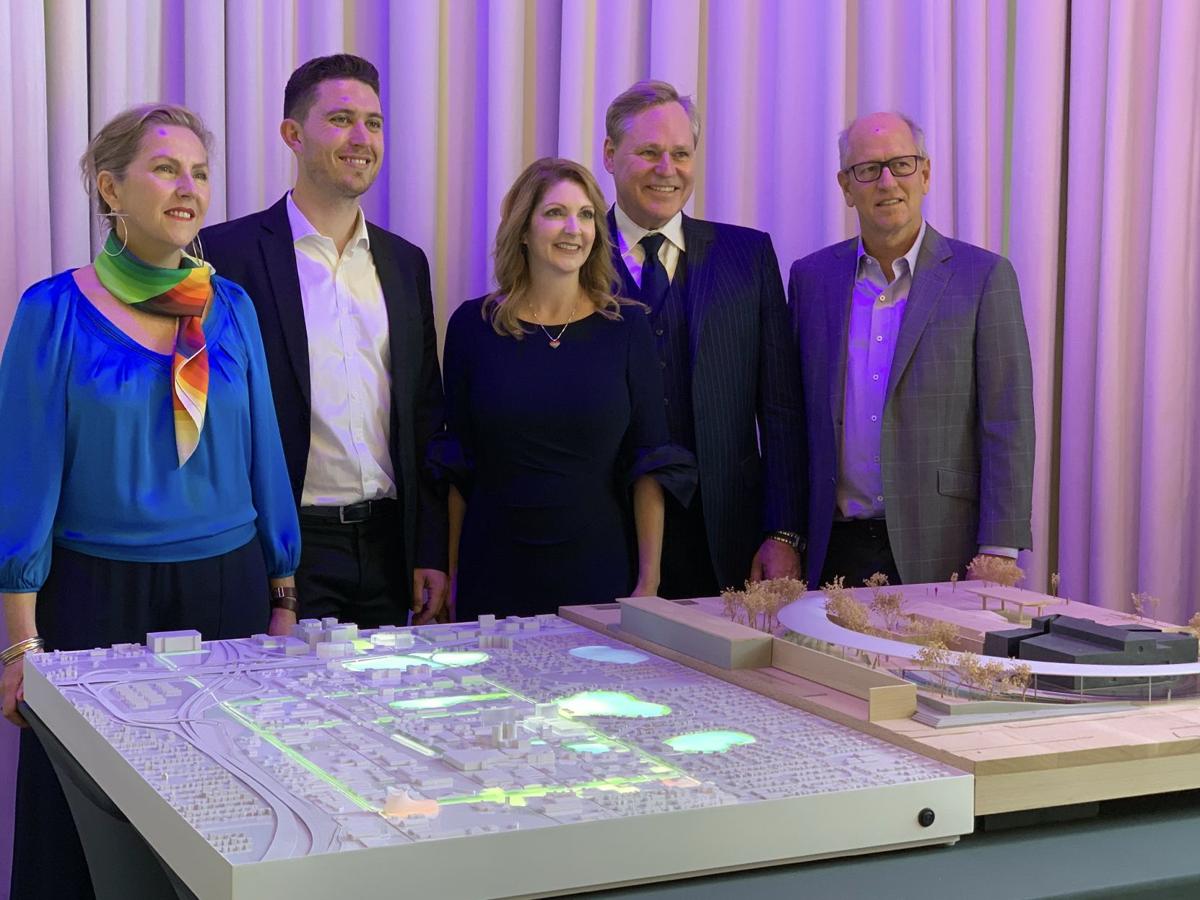 Coldefy & Associés and onePULSE Foundation CEO Barbara Poma stand in front of a model for the permanent Pulse memorial, which Coldefy designed, at the Dr. Phillip’s Performing Arts Center Wednesday. The memorial is set to open in 2022. 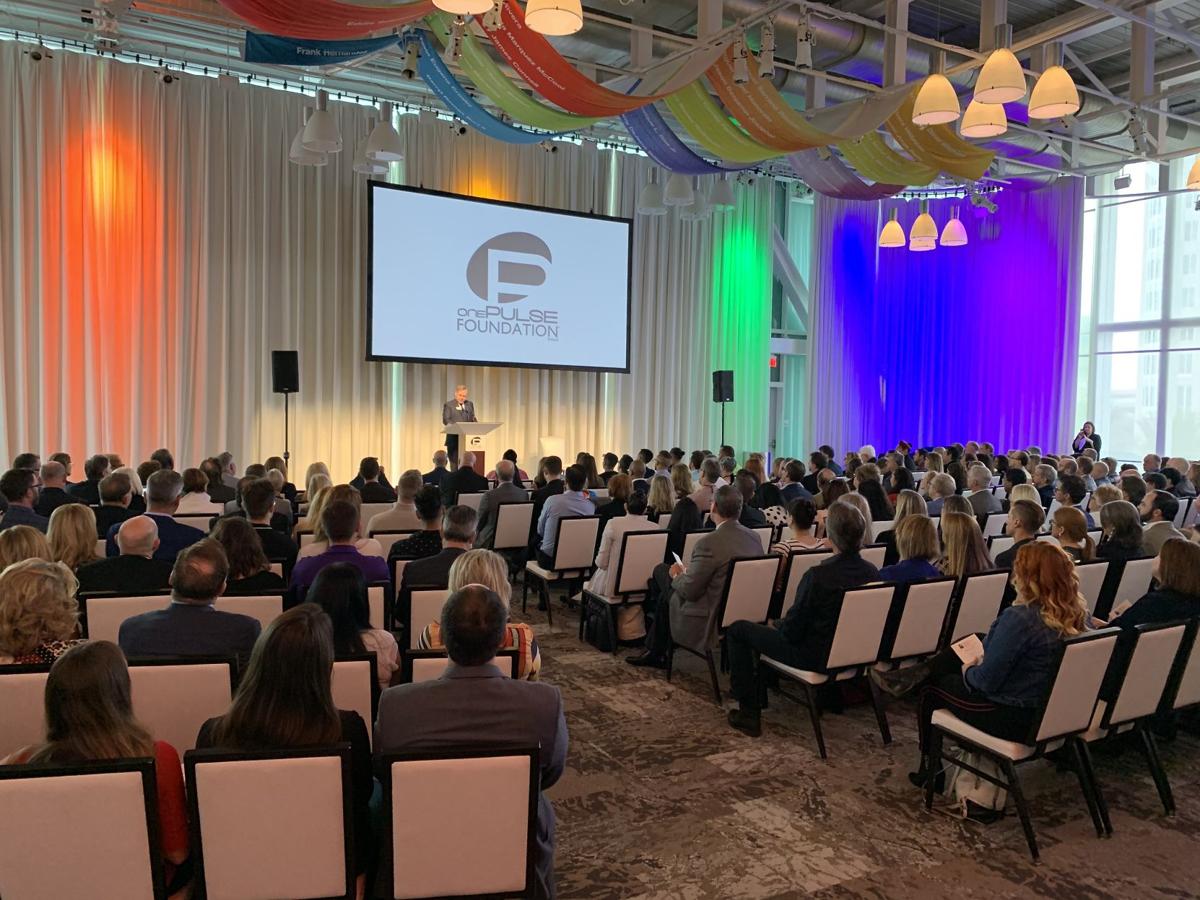 Pulse survivors and members of the Orlando community come together to witness the unveiling of the winning design of the National Pulse Memorial and Museum at the Dr. Phillip’s Performing Arts Center Wednesday. The memorial is set to open in 2022.

Coldefy is one of the six design teams that competed to design the memorial and museum. The National Pulse Memorial and Museum is set to open in 2022 and will be located at 438 W Kaley St.

The design features a pool encircling the nightclub. There will also be a garden that will have 49 trees planted in memory of the 49 victims who lost their lives during the shooting.

Although onePULSE is moving forward with its plans for the museum and memorial, a group of Pulse survivors and family members of the victims do not support the plans for a museum.

The Community Coalition Against a Pulse Museum created the “no pulse museum” website to speak out against onePULSE’s plans.

Christine Leinonen is the mother of Christhoper Andrew “Drew’ Leinonen, a victim of the Pulse nightclub shooting and a UCF alumnus.

Leinonen is one of the three co-founders of the coalition. Leinonen and the coalition said they do not want the Pulse museum and memorial to be built by the onePULSE Foundation because they feel they are profiting off of the death of the 49 victims.

She said she feels the museum and memorial is not how her son should be honored.

The coalition believes the museum is a tourist attraction because onePULSE used the visitation numbers from the digital guest book at the interim Pulse memorial to apply for a tourist development tax grant.

In August 2018, the onePULSE Foundation sent its application for the grant to the Architectural Review Committee. According to onePULSE’s application, almost 30,000 visitors came to the interim memorial from May 8, 2018 until August 2018.

The money from the grant was used to buy the land the museum will be built on.

The Coalition feels the nightclub should be torn and the land it sits on should be public property.

Barbara Poma, CEO of the onePULSE Foundation, owns the Pulse nightclub and the land for the future museum and memorial.

Poma said the coalition’s thoughts should be heard, but she disagrees with them. She said she is building the museum because people want to see it.

"It's important that they're heard, and they are heard,” Poma said. “But there's also a majority of others who you know want to see the memorial and the museum come to fruition.”

Siclaly Santiago Leon lost her cousin Luis Daniel Wilson-Leon in the shooting. Leon said she attended the unveiling because it will carry on the legacy of her cousin and supports the plans for a museum and memorial.

"It's going to lend itself for education, for community events and to let us tell our narratives of our family members and the survivors,” Leon said.

Leinonen said she isn’t against a memorial in honor of the 49 victims, but feels it should be done a different way.

Coalition co-founder and UCF alumnus Zachary Blair said he would rather see a public memorial park like the Pulse memorial labyrinth at Colonialtown Square Park.

“A public memorial park is something that would respect those who were murdered,” Blair said.

Blair and Leinonen said they would rather see the museum be a center for mass shooting victims which could still be designed by Coldefy & Associates, the winners of the design competition. They also want all the donations for Pulse to be put in a trust for all the survivors who are still in need.

Leinonen and Blair said they are going to continue to raise awareness to their fight against the museum.