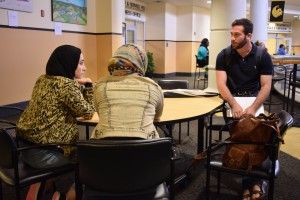 Jared Dipsiner approaches Dima Alshaibi (left) and Heebah Ahmed to ask if they will agree to be interviewed as part of his video series for his Middle Eastern News project on Nov. 18 inside the Student Union. (Photo by Deanna Ferrante) 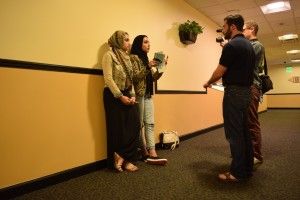 Dima Alshaibi (left) and Heebah Ahmed answer Jared Dipsiner's questions about the Islamic state for one of his videos as part of his Middle Eastern News project on Nov. 18 inside the Student Union. (Photo by Deanna Ferrante)

Jared Dipsiner approaches Dima Alshaibi (left) and Heebah Ahmed to ask if they will agree to be interviewed as part of his video series for his Middle Eastern News project on Nov. 18 inside the Student Union. (Photo by Deanna Ferrante)

Dima Alshaibi (left) and Heebah Ahmed answer Jared Dipsiner's questions about the Islamic state for one of his videos as part of his Middle Eastern News project on Nov. 18 inside the Student Union. (Photo by Deanna Ferrante)

You can't escape them. The images of a war-torn Middle East proliferate newscasts, newspapers and magazines. We see the cities in ruins, the terrified citizens fleeing the destruction; a place so unlike our own it seems almost unreal.

Here at UCF, however, one student is trying to change the way the world sees the Middle East.

Jared Dipsiner, a freshman marketing and real estate major, is offering a new perspective on the region with his multimedia project called Middle Eastern News, which includes a Twitter account, interactive website and a weekly video segment.

Dipsiner started the project back in high school after visiting Israel and experiencing one of the conflicts in the news up close. While he was visiting, three boys were kidnapped and killed, and later, while he was walking down the street, he heard seven large sounds that turned out to be missile strikes.

"It was kind of a mind-shocker being from like North America and never experiencing anything like that, and then really living one of the things you probably see on the news," Dipsiner said.

Living in the midst of all the events covered by the news sparked Dipsiner's interest, but also stirred a passion to show a different side to the region.

He said he ended up falling in love with the Middle East, which he saw not as a land of devastation, but one of beauty.

"I was shocked by the fact that the country was absolutely beautiful and nothing like how it's depicted on the news," he said.

Two months ago, he decided to take the project to a new level and include a video segment every week. The videos aim to inform the public of the facts, without the biases found in other news sources, Dipsiner said.

"We don't really give you our opinion. All these news stations, they'll kind of feed the information and slant it toward their view, but we really don't do that," he said. "All we do is … we ask everyone a question to scale their knowledge … and give them information and factual things that happen. And from there, we ask them to form their own personal opinion."

So far, Dipsiner has produced five videos. After making the videos for a month independently, Dipsiner decided to accept an offer for sponsorship from Central Florida Hillel, a Jewish foundation for students at the university, so he could get the financial support he needed for the project.

"I'm a college student, I don't really have that much money to spend on equipment," he said. "So, they provided me with a camera and microphone, things like that."

To create the videos, Dipsiner walks around crowded places on campus, such as Memory Mall or the Student Union, on Wednesdays and asks people his questions. Then, he posts the videos on his website the following Mondays.

To date, his videos have reached people in 17 different countries around the world, including local Orlando viewers.

Students Alshaibi Dima and Heebah Ahmed were interviewed by Dipsiner for one of his videos about the many names given to the Islamic State terrorist organization.

"It's refreshing to see that people actually have their own views and their own opinions," said Dima, a junior health science major.

"There's a lot of people who need to be aware of everything that's going on, and there's a lot of misconceptions going on," said Ahmed, a freshman health science major. "They're getting our views too."

Other students said that there is a lot of value in the project for everyone, not just those directly involved with the Middle East.

"I think there's definitely a lot of people who have opinions on it, or have something to say or some kind of insight … so to kind of open up that conversation and share it with people, I think that could be very beneficial," said Jacquelyn Bippus, a senior international and global studies major.

Bippus is president of the UCF French National Honor Society and said that this type of news is especially important now, in light of the recent terror attacks in France.

"That fact that there was an attack in a Western country in a very metropolitan area, I feel like that's, in the minds of the public, really shaped their perceptions of what this is and really kind of changed what this threat is," she said. "I think it's going to be a much more common and current topic — a lot stronger than it was before."

Dipsiner said he hopes his videos will ultimately allow people to associate the Middle Eastern region with something positive.

"Typically, if you ask any random person about the Middle East, the first words that come to mind are violence, terrorism," he said. "I want people to associate it with scientific innovation, things like that."